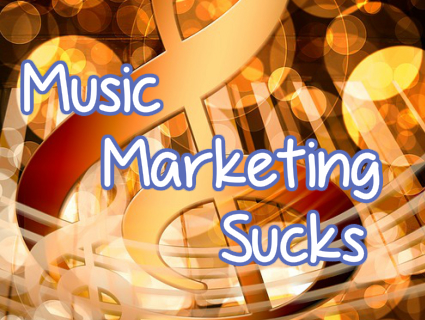 Music marketing: Don’t like it? Marketing your songs or band? I feel your pain.

Up until recently, I had 647 recordings sitting in boxes in my mom’s garage. From 1980-something! They were frickin’ cassettes. I had done what most musicians have done. I spent hundreds of hours in the studio, putting together my ‘masterpiece’, and then didn’t do shit to promote it.

Then, I spent the next hundred or so years lamenting the fact that my artistic ‘genius’ had gone unnoticed. Romantic, eh? No. It sucks. And I’ve wasted a large chunk of my life on this stupidity.

We All Hate Music Marketing

The truth is, when it comes to music marketing, most of us do-it-yourself musicians are not only lost, but don’t want to be found. If it were up to us, we’d just stick to being a singer/songwriter or power metal band, and sit in our basement, recording songs, doing the occasional live gig, and hoping the world discovers us.

But we know the music biz doesn’t work that way. As indie musicians, we’re competing with a vast amount of noise from signed musicians on record labels, with huge marketing budgets.  Not only that, our competition for the attention of our fans, is cat videos on social media.

And where do we focus our efforts? YouTube? Spotify? SoundCloud? ReverbNation? Do we sell music, or give it away? Do we do a full album release, or spaced single releases? Do we produce a podcast, have an Pinterest presence, or use twitter for music promotion? Do we spend our time getting our music out to radio stations and music blogs?

As DIYers, how do we make money? It seems hopeless, at times.

But you know, it’s not hopeless. The old ways of doing the business of music are (mostly) dead. There’s a new music ‘business’. Wherever the old, established, traditional way of doing things dies, and a new order springs up, there is chaos — and opportunity. And usually (metaphorically, in this case), blood in the streets.

This section of TheDoItYourselfMusican website is about what we can do that makes sense, to market and promote our original music. It’s about us helping each other navigate the new music industry. It’s about figuring out which music promotion and marketing methods work, and which don’t.

As indie musicians, we’re in a tough situation. Most of us don’t have business, marketing, or promotion backgrounds. Most of what we knew about how the old music industry worked is no longer valid. Most of what we try just doesn’t get results.

The old way of doing things is dead.

Getting signed to a major record label used to be just about the only way to make it in the music biz. There was almost no other way to get your recordings in music stores across the country, or go on tour.

Now, there are few barriers between you and your fans. You can easily set up your own web site to sell your music, or get your songs on iTunes and other music retailers. The old middlemen are largely gone.

But there are hordes of musical artists competing for the same fan dollars.

So promotion and marketing your music becomes even more important. In short, labels used to promote acts. Now, you don’t have to use a label, but you’ve got to promote yourself.

And I’ve seen some bad, bad advice from some of the music marketing ‘gurus’ out there. There’s one guy who says, “record a funny little song to tie into current events.” That’s likely a terrible idea (unless your main thrust is funny songs).

I follow one guy who advises a strategy for engaging with fans that works. But it’s time consuming. When I did the numbers, it looked like his star pupil was making about $5/hour using his techniques! His star pupil.

Why Listen To Me About Promoting Your Music?

Don’t. I’m not very good about promoting myself. Mostly, I’m just going to tell you about things I’ve tried, and what happened when I tried them. You can make up your own mind.

I do have a lot of business, marketing, and promotion experience (I run a non music-related internet business). I’m an award -winning songwriter and producer. I taught audio engineering at the college level. I’ve worked in radio professionally, and for a record company. And I’ve even toured the country a couple of times as a guitarist in a punk band (we made more money printing t-shirts than we did on CD sales).

I’ve probably made just about every mistake there is to make, in music. I do have the business/music business experience to be a decent judge of what works and what doesn’t. Hopefully, I can help keep you from making the same mistakes I did. Plus, I want to learn from your experiences, too.

I’m just going to lay out what I find out. Although I may have occasional affiliate links when I link to a particular music marketing program, I don’t really have a dog in the fight, except my personal dog. In other words, I don’t have anything to sell you (in case you’re not aware, most ‘review’ sites on the internet are just bullshit glowing reviews and affiliate links [the link earns money for the web site, so they’re motivated to give positive reviews]).

BTW, I’m not going to talk about big budget promoting and marketing (unless it can scale). I don’t have thousands of dollars to pour into a music career. I have a kid, who’s about to go into college. And there’s my nasty guitar buying habit. This is about how your average Joe, Jane or band, can promote their music on a limited to non-existent budget.

How Did I Overcome My Mind-Set And Become A Successful, Indie Musician?

I didn’t (except the mindset part, mostly). I’m just a guy, plugging along like you are. I don’t sell millions of downloads, and I’m not a YouTube star. I’m just trying things out, and reporting what works. I hope you find it valuable.

Music Marketing Efforts: Part Of A Strategy To Reach A Goal I hear a END_OF_DOCUMENT_TOKEN_TO_BE_REPLACED

Music Marketing Mistakes I ran across a music-related web site recently, and it’s a END_OF_DOCUMENT_TOKEN_TO_BE_REPLACED

ROI For Musicians — What Is It And Why Do You Need It?

There’s a concept in business, called ROI. Here’s how it applies to music, and END_OF_DOCUMENT_TOKEN_TO_BE_REPLACED

Selling Swag, Perks, & Promoting A Cause

What's wrong with me?I don't like a lot of things that people who teach END_OF_DOCUMENT_TOKEN_TO_BE_REPLACED

Music Isn’t Valued — What Can You Do?

I feel your pain. You’ve spent months rehearsing for a gig, weeks in the END_OF_DOCUMENT_TOKEN_TO_BE_REPLACED

“Dude, can you send a Spotify link, I don’t want to pay $. 99?” That’s END_OF_DOCUMENT_TOKEN_TO_BE_REPLACED

I saw a discussion on Facebook the other day. A bunch of musicians were discussing END_OF_DOCUMENT_TOKEN_TO_BE_REPLACED

When To Ignore Feedback On Your Music

So, I had this idea that I’d use AudioKite to help figure out how END_OF_DOCUMENT_TOKEN_TO_BE_REPLACED

I bought a program on how to use Facebook to promote music. The author of END_OF_DOCUMENT_TOKEN_TO_BE_REPLACED

Recently, a Facebook friend of mine (I don’t know her personally, she’s a friend of END_OF_DOCUMENT_TOKEN_TO_BE_REPLACED