Want To Produce Your Own Music? 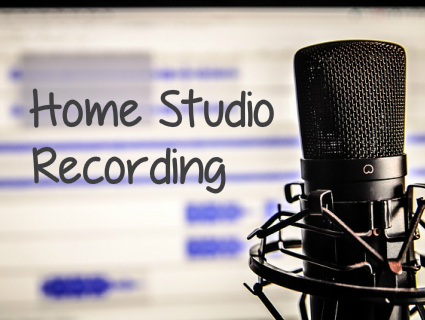 Music production for independent artists, in home studios, is a big subject. A BIG subject. And a lot of people have the wrong idea.

I ran across a post in a music forum the other day. The guy asked, “What plugins do I need to get that big, professional sound? What do I need to buy?” That’s akin to asking “What kind of guitar do I have to buy to sound like Stevie Ray Vaughn?”, or “What microphone did Tupac use, to become a great rapper?”

And wearing a cape doesn’t make the man of steel.

Gear is part of the music production equation, but knowledge and skill are the other two parts, and they are bigger, and more important.

That’s where I come in. We’re going to dig up the knowledge and show you how to get the skill, to make great sounding home recordings.

Things have changed very quickly in the recording world, and many folks have not yet caught up. We can now do things on our home computers that were difficult or impossible,  in the best studios, just a few years ago. The Beatles started out recording on two-track machines. Now I can use 50, or 100 tracks on a single song, if I want to. No problem. Well, the only problem is, I’m not the Beatles.

Guitar modeling (taking a plain guitar signal and making it sound like it’s being played through an amp), and the low-cost digital versions of formerly prohibitively expensive effects — reverbs, compressors and delays are a couple of examples of fairly recent advances.

But navigating this new world is a little like the old west. It’s a jungle out there (OK, I’m mixing my metaphors, but you know what I mean). It’s good to have people let you know what worked for them, and the solutions they’ve found, and how they’ve used them. That’s why I’m here. I hope we’ll advance together.

Why Listen To Me About Music Production?

You probably shouldn’t, although I’ve done it quite a bit. I worked in small recording studios for years, and have produced, or engineered a ton or records you’ve never heard of. I did know a guy who worked on a recording that Chris Cornell’s brother performed on (allegedly). That’s pretty cool, huh?

Truth is, I’m a down-in-the-trenches, middle-of-the-road producer/engineer. I’m not famous. And honestly, I’m not that good. A lot of the recordings I’ve done for bands have been low-budget, and extremely fast. I became an expert at one thing — how to get the best possible sound with the least amount of time and money.

That’s what you want, right?

You’re sitting in your house, or apartment, or practice space, and wanting to know why your recordings don’t sound as good as Taylor Swift’s. Well, you can’t get her quality of recording on your budget. But you can get surprisingly close. That’s what I’m about.

I’m now what you call a home producer (or bedroom producer). In other words, I do music production at home — I record my own songs, on my laptop, in my apartment (or wherever I am — my setup is mobile). I know how record good sounds, arrange songs, mix, and master.

You probably are doing most of that, or want to do that, too.

Whenever I try out a VST plugin, I’ll let you know how it goes. If I learn a new trick on my DAW (my recording program), I’ll tell you what it is. If a good vocal mic goes on sale, I’ll let you know. If there’s a good course available (I don’t have one to sell), you’ll hear about it here. When things don’t go well, I’ll tell you about that, too. You can avoid my mistakes, and save a lot of time just by dropping by and reading a few things 🙂

I have another skill. I can cut to the chase with technical stuff. I make it easy to understand. I don’t bog down in technical details, but get to the realities of what you can use right now, and how to use it.

Yes, we’ll cover some of the technical side of things (when you really need to know). But we’re going to stick with practicalities.

In short, the info here will save you time and money. And those things are in short supply for most if us :-).

PS: I’ll have some cool road-warrior stories too. I’ll tell you about working with the guy who recorded Louie Louie.

ReaFIR is an FFT based dynamics processor, and one of the suite of plug-ins END_OF_DOCUMENT_TOKEN_TO_BE_REPLACED

Gain staging is hitting the right levels at the right time. In other words, END_OF_DOCUMENT_TOKEN_TO_BE_REPLACED

Why Isn’t My Song As Loud Or Sound As Good As Other Songs On Spotify, YouTube, CD, Or Radio?

How To Get Your Song Ideas Down Quickly & Securely

Yesterday, I found a recording from maybe 1984, of an idea I had for END_OF_DOCUMENT_TOKEN_TO_BE_REPLACED

Quantizing & Pitch Correction — When To Do It?

When should you quantize (making the timing of notes more precise, by computer), or pitch correct END_OF_DOCUMENT_TOKEN_TO_BE_REPLACED

Recording engineers often EQ a control room, or mixing environment. The idea is that END_OF_DOCUMENT_TOKEN_TO_BE_REPLACED

Recently, I got hired to put some guitar tracks down on a song. The END_OF_DOCUMENT_TOKEN_TO_BE_REPLACED

I see lot of people who are just starting out with recording, getting confused END_OF_DOCUMENT_TOKEN_TO_BE_REPLACED

How To Set Up A Home Studio